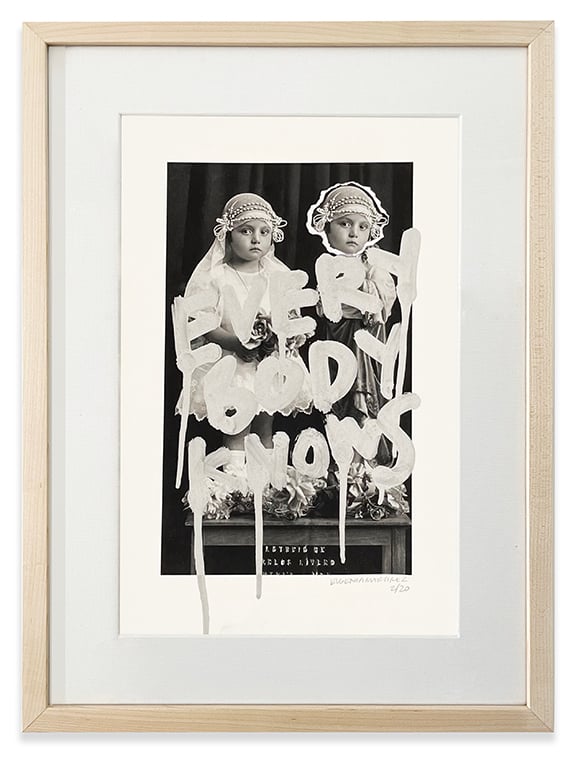 The written phrase is taken from the Leonard Cohen song, "Everybody Knows" which expresses the idea that the game of life is fixed.

Part of the renowned series BECAUSE YOU ARE A GIRL, this limited edition work features collage and hand-lettering that visually emphasizes female empowerment. The song that inspires it is one of resistance and hope and Martinez plays off of its lyrical wit by putting the face of the little girl twice, doubling down on the idea that the future is female.

MORE FROM THIS ARTIST

BECAUSE YOU ARE A GIRL

Because You Are a Girl is a critically acclaimed series by Mexico City-based artist Eugenia Martínez in which she questions the construction of the feminine from its oldest representations such as the Venus of Willendorf, in which and since then, the representation of woman has been reduced to the objectification of a life-generating entity, which does not hear, does not see and does not speak.

Eugenia uses found photography from the 19th century, layered with hand-painted words and porcelain, a material used for its perceived fragility. The porcelain is shattered, the shards arranged in streams and halos around her figures, representing the breaking of traditional stereotypes and a transformation of the delicate and domestic into strength and empowerment.

The text consists of literal or distorted quotes from politicians, moral leaders, and slang words from song lyrics – all brought together to represent a collective and often contradictory point of view that addresses issues of patriarchal power structures, past and present.

For International Shipping rates or special crating services, we will contact you after purchase for an estimate.